Each spring, icebreaking ships launch into the Great Lakes of North America, clearing the locks and channels that connect the sprawling inland waters. Soon after, a fleet of more than 100 cargo ships returns to the frigid waters. It's the start of a nine-month sprint to ferry industrial supplies hundreds or even thousands of miles.

"All of our revenue is earned from April 1 to Dec. 31, and when we are moving, we are moving all the time," said J.D. Kern, CPA, CGMA, the CFO for Rand Logistics and its 14 "laker" ships.

"If they go down for an hour, we know about it."

Right now, though, Kern is not just worried about an hourlong disruption. He's planning for a change that could take years to play out, affecting not just the Great Lakes but the global shipping industry and consumers as well.

Starting 1 January 2020, the international shipping industry — from Lake Ontario to transcontinental routes — will have to reckon with higher prices for its most basic supply, fuel. It's also a change that could affect everything from consumer goods to air travel. And it's a prime example of the regulatory reforms that will challenge finance leaders as global industries struggle for environmental sustainability on a changing planet.

"It's been talked about for a decade," Kern said. "And really, in all honesty, it's a reckoning that's been needed."

Rand's 700-foot ships burn up to ten tonnes of fuel per day as they ferry wheat, rock, and other dry bulk across the lakes. On the open ocean, larger ships can use more than 300 tonnes of fuel per day. And sulphurous heavy fuel oil makes up 76% of the shipping industry's consumption by tonnage, according to 2012 statistics provided by the UN's International Maritime Organization (IMO).

Currently, many maritime shippers use some of the cheapest fuel available — viscous, tar-black bunker fuel. Bunker fuel is loaded with sulphur, which causes respiratory and other health problems for people living along shipping routes. It may also be linked to lightning storms on shipping routes, according to research cited by the World Economic Forum.

Now, the IMO is implementing significant new restrictions on sulphur emissions. As a result, Wood Mackenzie, a global research and business consultancy headquartered in Scotland, has estimated that shipping fuel costs could rise by $24 billion — about 25% — in 2020, Reuters reported.

The US Energy Information Administration has predicted "modest upward pressure" on crude oil in late 2019 and early 2020 but expects it will diminish over time. Either way, experts in shipping and adjacent industries are bracing for the impact.

"A big change, really, but it's needed to save the environment by reducing pollution," said Sameh Rassoul, CPA, CGMA, the chief internal auditor for National Navigation Co., one of the largest shipping companies in the Middle East.

Starting 1 January, the maximum sulphur content for fuel will drop from 3.5% to 0.5% by mass. That will force shippers to seek new fuel sources, such as liquefied natural gas. Those fuels can be economical, but older ships must be retrofitted to use them. Also, the availability of some fuels may not match up to shipping routes.

Alternatively, shippers can install costly "scrubbers" that keep sulphur pollution from reaching the atmosphere. That allows them to keep burning cheaper fuel, but the initial outlay is expensive — installation of scrubbers on Rand's Great Lakes ships, for instance, would cost $2 million to $6 million per ship. Instead, the company plans to retrofit many of its ship engines to burn cleaner fuel.

For years, shippers have been plotting out "a fair-value exercise to see how that will affect me", Kern said.

"Each shipping company has to select the alternative that is cost-effective and compatible with its long-term goals and operating plans," said Rassoul, who stressed that he was not speaking for National Navigation Co.

Ripples along the supply chain

But this isn't just an industry question. The global shipping industry moves about 90% of the world's trade — so those costs will cascade from the back office of the shipping companies down to consumers.

"We can expect that it will take some years to reach stable ground after the settlement of all the surrounding issues," Rassoul said, "because this process is very complicated, and many industries are sharing in the effects."

First, the shippers will see how much of the cost they can shift to direct customers. Some contracts allow regulatory costs to be adjusted, while other expenses will require some finesse.

"What can our sales force negotiate, and what will the market bear, in terms of passing those costs along?" Kern said. The effects will be different on different shipping routes: China already requires low-sulphur fuels near ports, and certain areas near North American, European, and Caribbean coastlines also fall under strict limits. On the Great Lakes, some but not all of Rand's fleet already is affected by sulphur limits.

The same change is affecting cruise lines. Carnival said in its 2018 annual report that it already was installing "advanced air quality systems", in part to comply with narrower regional regulations. In fact, all of the major American cruise lines plan to use scrubbers in the long term to meet the 2020 requirements, the Miami Herald reported. But, in the meantime, Carnival advised investors in 2018 of a fuel-price spike.

The best way to prepare, Kern said, is for financial leaders at each layer of the market to ensure a strong relationship with their supply chain teams. 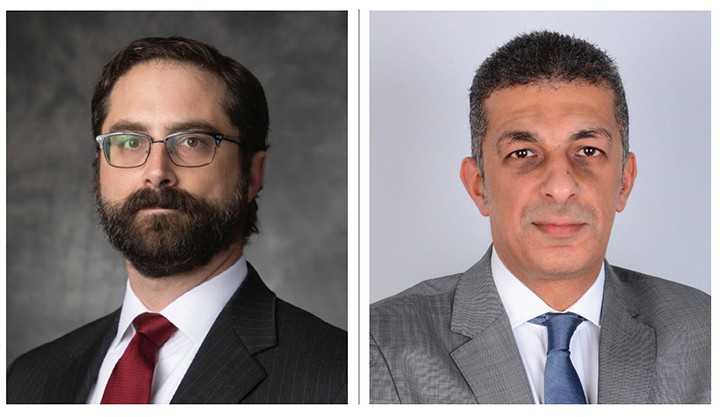 "The finance department will have to push their supply chain department to have deeper conversations with the shippers that they use as vendors," said J.D. Kern, CPA, CGMA, the CFO for Rand Logistics (at left). "We can expect that it will take some years to reach stable ground after the settlement of all the surrounding issues," said Sameh Rassoul, CPA, CGMA, the chief internal auditor for National Navigation Co. (at right).

The IMO 2020 regulations were agreed in 2008, but many shippers expected the timeline would change. Now, the possibility looms large, even as the IMO considers other proposals to reduce emissions, such as speed reduction of vessels, or "slow steaming". Enforcement will be the responsibility of the ships' flag nations, which means there could be some variability. But the consequences will be serious: Ships that fail to comply could lose their charter to sail, and major insurance companies also may require compliance, according to information services company IHS Markit.

So, when the rules were confirmed in 2016, it set off a scramble for shippers, oil producers, and others. For example, IHS Markit warns that there is concern that refineries may not be able to meet demand globally for the low-sulphur fuels. And the retooling of production may send secondary ripples through the oil markets.

"Refiners — and fuel buyers — will experience significant price impacts as they shift production to deliver greater volumes of very low-sulphur fuel oil and find a market for their less valuable fuels," said Spencer Welch, an executive director for the company, in a news release.

While the market adjusts, demand for some exports could waver, too.

"We may see some decline in demand on nonessential commodities, at least until the settlement takes place and the industry restores its stability," Rassoul said. "So, those who work in the production of some products which intensively depend on export have to consider those changes unless they already have signed long-term contracts."

Besides higher prices on goods, the change also could have secondary effects on other fuel-dependent industries such as air travel, according to Wood Mackenzie.

And then there's the bigger picture: IMO 2020 could be just a preview of sweeping regulatory shifts to come. The shipping industry is a significant source of greenhouse-gas emissions, with carbon emissions roughly equal to the nation of Germany's.

In 2018, the IMO set its initial goals for addressing that much larger issue. The organisation wants the industry's greenhouse-gas emissions to drop by at least 50% by 2050, compared with 2008. Such a change would require dramatic technological upgrades, such as battery- and fuel-cell-powered ships, which are appearing on only a small scale now.

The next few years may show just how prepared — or not — the world is for the larger changes that climate change will require. And the time is now, Kern said, for finance leaders to learn how to deal with regulatory reform.

The best strategy, he said, is to immerse oneself in the facts of the company and the industry. "When you're dealing with regulatory change, you really have to learn about the rest of your company," Kern said.

Andrew Kenney is a freelance writer based in the US. To comment on this article or to suggest an idea for another article, contact Neil Amato, an FM magazine senior editor, at Neil.Amato@aicpa-cima.com.