The recent JLL City Momentum Index 2019 highlights the world dominance of Asia-Pacific cities in terms of their rapid urbanisation and economic growth, with Indian cities leading the table.

A total of 19 out of the top 20 cities in the index are in the Asia-Pacific region, with Indian and Chinese cities accounting for three-quarters of that list. No American or European cities are in the top 20 in the rankings, which were released by global property and investment professional services company Jones Lang LaSalle to coincide with the January 2019 World Economic Forum meeting in Davos.

India heads the index, with Bangalore (Bengaluru) and Hyderabad placed first and second, respectively, and Delhi and Pune at fourth and fifth, respectively.

The Kenyan capital Nairobi (sixth) is the only non-Asian hub in the top 20.

Jeremy Kelly, director in JLL's global research programmes and one of the report's co-authors, said that Indian cities have "taken on the mantle of being amongst the world's most dynamic currently".

Comparing momentum over a short horizon, in 2014—2015 the top of the index was dominated by Chinese cities, but Indian cities have risen to the fore since 2017, Kelly said. "This reflects the fact that Indian cities are very firmly in their city-building stage, which the Chinese cities were a few years ago.

"[Chinese cities] are starting to bed down ... to move into more sustainable levels of growth. They are starting to emphasise ... the innovation economy rather than relying on infrastructure and real estate development to motor their economies.

"The movement down the momentum index by the Chinese cities is entirely predictable, and it's something you would expect as those cities start to mature," he said.

Indian cities had "ramped up" their infrastructure investment, he explained. "Some of the cities that are featuring towards the top of the list tend to be those that have got reasonable technology credentials. Bangalore, Hyderabad ... have become globally competitive when it comes to IT activities and have moved very successfully up the value chain in recent years."

Kelly said Indian cities were igniting interest from international investors. "You are starting to see more opportunistic funds moving into India for the first time," he said.

India was a top improver in JLL's 2018 Global Real Estate Transparency Index, while the 2019 momentum index describes India's recent Real Estate (Regulation and Development) Act (RERA) as a "notable highlight" in increasing transparency and reducing corruption. Further, it says "the recent creation of a single national VAT system will boost the logistics sector and make for a more business-friendly environment". 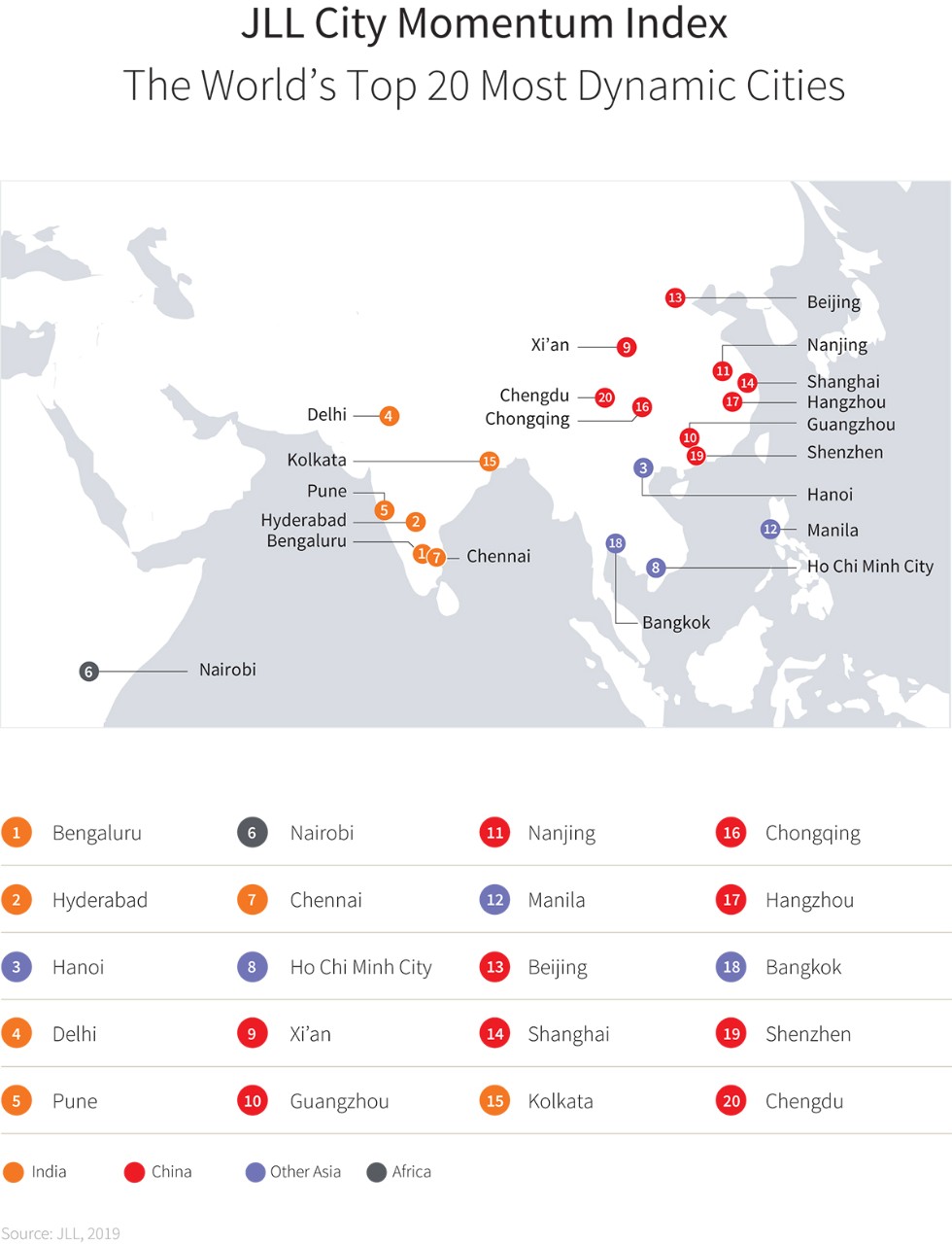 Kelly said fast-growing cities face many challenges. Cities at the top of the index, he said, are also at the front line "when it comes to tackling the many challenges that cities have in absorbing massive rates of growth. Indian cities epitomise that with regards to their environmental challenges and increasing social inequality [and] congestion."

One of the challenges is how these cities move into the innovation-based economy and create more sustainable momentum over the long term. Kelly said in a JLL press release: "It's clear that the tech sector is a key driver of both real estate and economic momentum — driven by large technology firms as well as dynamic startups in cities like Bengaluru [Bangalore], Hyderabad, Ho Chi Minh City, and Shenzhen."

Vinesh Singh, FCMA, CGMA, vice-president at shoe manufacturer Sara Suole Pvt Ltd. in Bangalore, said that the educated workforce in southern Indian cities was a reason multinationals opted to base themselves in Bangalore and Hyderabad.

Bangalore, often described as India's "Silicon Valley", has the headquarters of global IT companies such as Wipro and Infosys. It also has a large migratory young workforce from across India, Singh explained. "They are extremely aspirational in their outlook ... they take chances, they make choices, and startup culture is very prevalent here."

In contrast to JLL's previous city momentum indexes, which identified cities with the attributes for short- and long-term success, the 2019 index looked only at the short term — over a three-year horizon. It covered 131 established and emerging business hubs globally.