Build from the ground up

Let the people who are performing the tasks daily take the lead on the transformation. These employees know the processes best. They know the workarounds. And chances are they’ll be able to write the best programs. Just train them how to do it.

For that to succeed, middle management needs to let the change happen, so give them decision rights on how best to do that for their company or division.

Pick an application, and don’t dwell on the decision

Applications are sprouting and evolving quickly, but the concepts will generally remain for some time. So rather than waiting for the ultimate software that does it all and integrates with everything, just get something that works.

Suter sees RPA software at this moment in the tech continuum this way: “They’re all about the same. Start experimenting with one. If it’s not the right one, try another one.”

And once that perfect technology arrives, if ever, your employees at least have an idea of how it works, even if they don’t know exactly where to click.

Dive in and embrace experimentation

As with choosing the right software, internal experimentation doesn’t have to be perfect.

“A big part of the process is getting people to just start somewhere,” Suter said. The sooner employees can grasp the concepts of RPA, the sooner the technology will reap benefits.

Early on, that might mean that an employee figures out how to automate just a part of a process. Over time, as the employee learns more about RPA and other automation tools, they will see ways to automate an entire process.

“Automating a ten-hour process down to an hour is better than taking a year to scope it [so that it’s fully automated],” Suter said. “And maybe from there we can automate the remaining hour down to 30 minutes.”

It’s a process that Scott Bender, CPA, CGMA, the director of automation and modernisation at FHR, calls “relentless incrementalism”.

You still need humans. You just might need them for different things

Some companies might see RPA or other process-related software as simply a cost-savings tool: Manage out the need for humans and save a pile of money.

FHR sees them as efficiency tools. That is to say, FHR sees automation as a way to get more value out of the talent it already has. It uses RPA to reduce manual processes done by people who could be doing more analysis, strategic thinking, process automation, and bot maintenance.

“Everything we automate still requires some human interaction,” Suter said. “Bots aren’t perfect. They interact with systems that are changing all the time. So it’s really the digital workforce-type person that we need.”

That portends a shift for many managers: “Instead of managing people,” he said, “you’re managing processes and automation.”

So an understanding, at that level, is critical. “Let automation do what it’s good at, which is the more mundane stuff such as moving data around, and now we can do the more fun stuff,” Suter said.

A big part of changing any culture is recognising and rewarding victories, big and small. By heralding successes, management reiterates its expectations and builds a culture of trust amongst those on the front lines.

How FHR rewards automation success runs the gamut from kudos in a staff newsletter, impromptu doughnut parties, and pay increases. The company’s compensation philosophy centres on the creation of value. Those who show the strongest aptitude for the technology are promoted, the embodiment of what success looks like in this transformation.

Meanwhile, on a corporate level, Koch holds events such as in-house digital workforce expos that enable subsidiaries to compare notes on how they’re using automation and other similar technology.

“It’s a lot of change going on at once, but it’s really exciting change,” Suter said. “We want all our employees to be excited about it.”

This strategy could help employees think more broadly about even the smallest forms of automation, an evolution in thinking that causes a task that takes 30 minutes a day to look like one that, if automated, would save the company 130 hours per year. It all adds up. 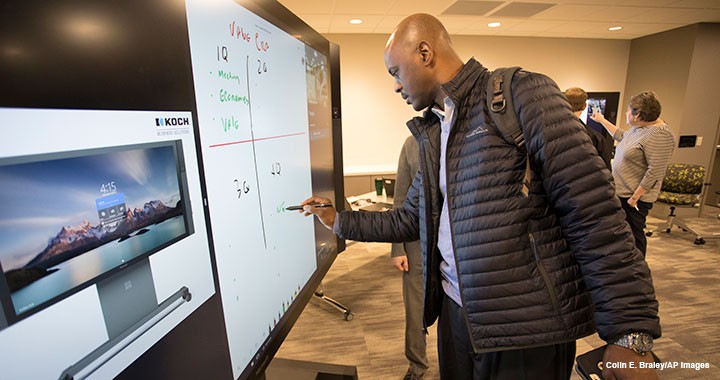 Koch Industries encourages subsidiaries to compare notes on how they are using automation and other similar technology.

Just as important as communicating success is letting others know when things go wrong. Doing so might save others from wasting time venturing down the same dead end.

View failures as another form of gained knowledge. And make sure everybody knows it’s OK. “If you aren’t failing, you aren’t experimenting,” Suter said.

“Human nature is to want to have perfect knowledge so that we don’t have failures; that just takes too long,” he added. “Perfection doesn’t exist.

“Make an informed decision. Go down a path. Fail quickly, fail cheaply. Go down another path.”

It’s also worth noting that, with RPA, a failed experiment could still yield savings. Say an employee goes into a project expecting to shave ten hours off a single, repeatable process but only saves two hours. That effort still represents a savings, and they probably learnt something along the way.

As accountants become more involved in automating processes, they’ll need to know how technology is evolving. Automation is just a small piece of the puzzle. Understanding how it will interact with machine learning and artificial intelligence is critical.

To Blake Goforth, an FHR accounting supervisor, it’s about taking the knowledge you have in accounting and being able to translate that to software. “Because just strict knowledge of software isn’t where you need to be,” he said. “And neither is just being able to keep journalised debits.”

And don’t wait for the technology to come to you. If you’re interested in RPA, but your company hasn’t gotten there yet, consider tinkering with a free RPA product. Several are available online.

Koch developed Koch University, an in-house training division aimed at helping employees keep current on concepts, frameworks, and technology. “The skillset and the competencies required in five years look completely different than what they look like today,” said Richard Dinkel, CPA, a Koch Industries vice-president who serves as controller and chief risk officer.

And keeping skills sharp in today’s environment is critical not for just transactional accountants, but for those who manage them — and, perhaps more importantly, those who will eventually manage them.

“You can go and create this digital, transformed workforce, [but if] you don’t have leaders who can manage that, you’re in trouble,” Bender said. “The management of some of this digital workforce is going to happen very early in people’s careers.”