Presenting data in a pictorial or graphical format can help explain difficult concepts or highlight new patterns. Data visualisations are not new; decision-makers have been using charts for hundreds of years. However, the increasing availability of user-friendly software is enabling easier creation — and increased ubiquity — of visualisations.

With this growing interest comes the expectation that accounting professionals use these data visualisation tools to more effectively and efficiently communicate financial information. However, if we are not careful, design choices intended to capture the viewer's attention may be misleading and improperly influence decision-making.

One potential problem is that the apparent simplicity of the data visualisation tools can lead users to underestimate the difficulty of creating effective visualisations. End users may have difficulty with the various aspects of visualisation construction, such as deciding how to map data elements to graphic attributes or selecting specific design details such as colour, style, layout, or chart type.

To aid the design process, it is important to understand design issues related to visualisations and avoid a few common pitfalls associated with creating data visualisations.

Pitfall: Not adjusting for inflation

Much of the data relevant to accountants is in the form of currency. A unique characteristic of currency is that its value changes over time, with the value of today's dollar being different from the value of yesterday's dollar. As such, comparisons of currency values spanning multiple time periods should be adjusted for inflation.

Two common indices are used in the US to adjust for inflation: the consumer price index (CPI), published by the US Bureau of Labor Statistics, and the gross domestic product (GDP) deflator, published by the US Bureau of Economic Analysis. Australia, Canada, Japan, New Zealand, Switzerland, and the UK also annually publish their own versions of the CPI. In the EU, the Harmonised Index of Consumer Prices (HICP) is utilised by the European Central Bank as the indicator of inflation and to establish price stability.

As an illustrative example, let's examine the salaries for CFOs in the US from large corporations with revenues of more than $500 million.

Staffing firm Robert Half conducts an annual survey of salaries for business professionals. Using those data, we see slightly different stories if we do not adjust for inflation.

In the top graph of Figure 1, we can see that the average salaries for CFOs have increased steadily since 2002 at both the low and high range. The midpoint salary for CFOs increased from $308,250 in 2002 to $394,000 in 2016. However, once we adjust for inflation and convert the data to 2016 dollars using the CPI (the bottom graph of Figure 1), the increase actually becomes a decrease. In 2002, the midpoint salary for CFOs was $412,369 when adjusted for inflation. By adjusting for inflation, we make the numbers from previous years comparable, enabling an "apples-to-apples" comparison. 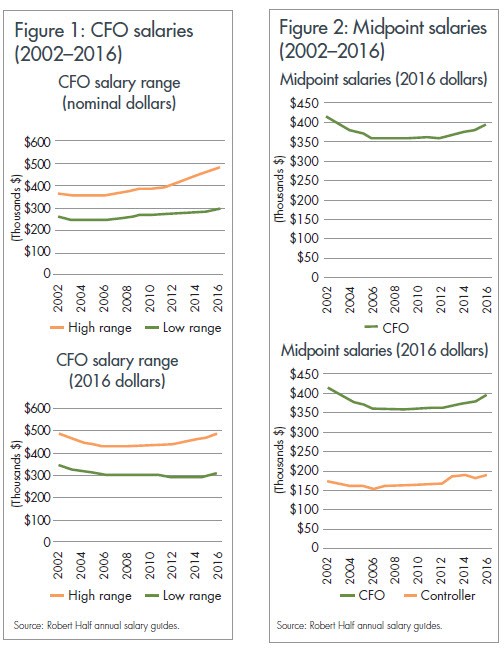 Pitfall: Not including appropriate comparisons

Numbers cannot tell a story alone. It is the context and comparisons that give meaning to the data. People discover meaning in the data through comparing the numbers and analysing patterns and trends. It is through comparison that judgements are formed and appropriate decisions are made.

Appropriate comparisons are context-specific. It is often useful, as in Figure 1, to compare data points over time. Other examples of useful comparisons include the comparison of actual numbers versus targets, forecasts, benchmarks, or norms.

The top graph of Figure 2 contains the data from the CFO salaries only. It displays the midpoint salary of CFOs from large corporations with $500 million or more in revenues over the 15-year period. Viewing only this trend line, we can conclude that CFO salaries, in inflation-adjusted numbers, decreased from 2002 to 2008, and then appear to be increasing through 2016. However, not many other conclusions can be drawn. A user of this data visualisation might prematurely conclude that the gap between CFO salaries and those of other employees must have narrowed during this period.

The bottom graph of Figure 2 provides a comparison between the same CFOs and controllers. We can now see that not only did CFO salaries decrease between 2002 and 2008, but so did controller salaries. Both groups have seen modest salary increases since 2008. The more questions we try to answer with the data visualisation, the more important it is to make appropriate comparisons.

Figure 3 contains a subset of the data from Figure 2, displaying the midpoint salary of CFOs from large corporations with more than $500 million in revenue. When only examining the straight green line from Figure 3, the reader could conclude that CFO salaries have decreased steadily since 2002. However, closer examination would suggest that this is not the complete story. 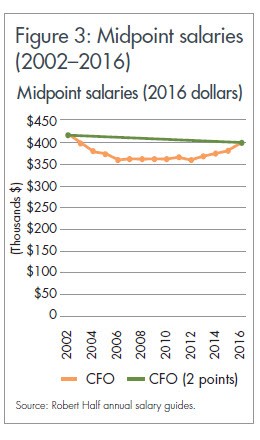 The reason is that the green trend line in Figure 3 contains only two data points: 2002 and 2016. However, to conclude a steady decline has occurred, the reader needs to know what the numbers are for the intervening years. This will help assure that 2002 and 2016 are not outliers and show whether the decline is indeed happening throughout the 15-year period.

The orange trend line in Figure 3 presents the data points for all the intervening years from 2002 to 2016. When the data points are included for each of the 15 years, it becomes obvious that there was first a decrease in CFO pay followed by a recovery in CFO salaries, with the impact of the years leading up to the recession of 2008 becoming more apparent. In addition, had two different data points been selected, such as 2006 to 2016, the user would have concluded that CFO salaries had increased steadily over that period.

A truncated graph has a y-axis that does not start at zero, creating an impression of more change or volatility. A rationale for truncating the y-axis is to use all of the space on the chart for presentation. However, a truncated y-axis magnifies the differences between the variables presented on the x-axis. The reader may interpret results correctly in a general sense (ie, CFO salaries have been volatile over time), but the perceived magnitude of the increase is different based on the two graphs presented in Figure 4, and the strength of the conclusions is different. 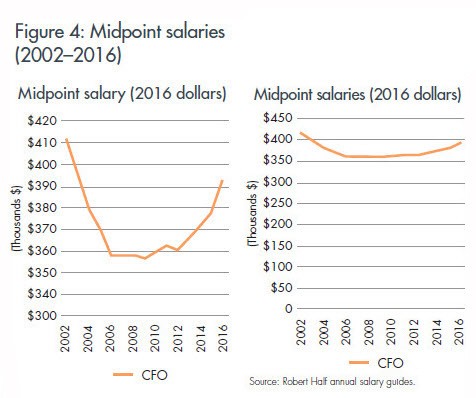 Pitfall: Inappropriate use of pie charts

Pie charts are frequently used to represent values in proportion to the total. With a pie chart, each individual slice of a pie represents a value in comparison with the total area of the pie. However, interpreting pie charts can be problematic. One reason is that our visual perceptions are unable to accurately assign quantitative values to a two-dimensional area, making it difficult to distinguish differences in the size of pie slices when the slices are close in size. This is especially true as the number of categories represented in the pie chart increases. 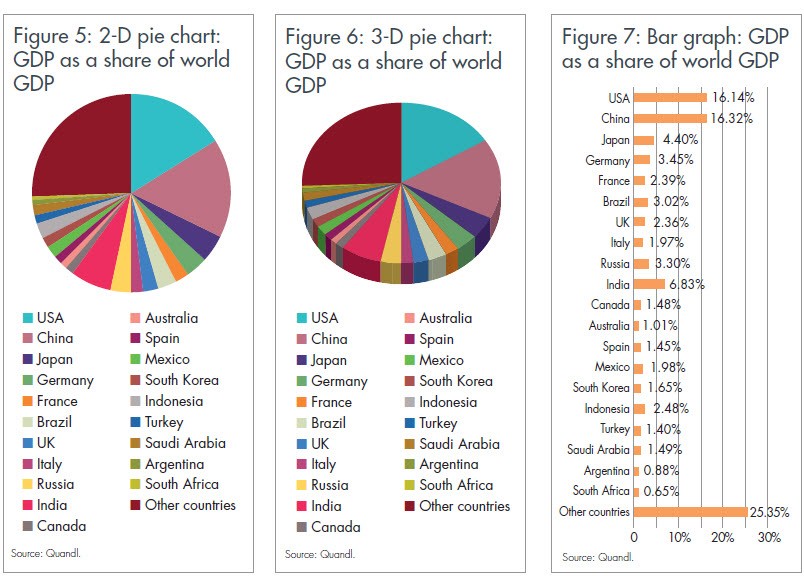 For example, Figure 5 represents the G20 economies' share of world GDP for 2014. It is obvious the US and China have the largest share of world GDP, followed by India. However, it is much more difficult to distinguish how meaningful this difference is based solely on the size of the pie.

Another reason pie charts are problematic is that it is difficult to identify what each slice of the pie represents. Notice the cognitive effort involved in shifting focus back and forth between the pie chart and the legend to determine what each slice represents, due partly to the difficulty of correctly matching a colour to a slice.

If a pie chart is selected as the data visualisation presentation type, it is important to understand how aesthetic choices, such as the use of a 3-D chart, distort the data. As exemplified in Figure 6, when using a 3-D chart, the users of that data visualisation may overestimate the proportion the category represented in the foreground and underestimate the proportion of the category represented in the background. In Figure 6, Italy (magenta) appears to have a larger proportion of world GDP than Mexico (bright green), but it is actually smaller.

To avoid faulty decisions that may be drawn from misleading data visualisations, accountants should reflect on the following questions:

For example, if a new cancer drug was only 0.5% more effective than an existing cancer treatment, 0.5% may not seem significant on a 0% to 100% scale, but 0.5% may indicate thousands of lives saved.

William D. Brink (brinkwd@miamioh.edu) is an assistant professor of accountancy at Miami University in Oxford, Ohio. He specialises in managerial accounting and tax topics related to individuals and business entities. Lorraine S. Lee (leel@uncw.edu) is an associate professor of accountancy at the University of North Carolina—Wilmington. She specialises in accounting information systems education.