For more than a decade, International Speedway Corp. couldn’t lose.

But then came the financial crisis. As the US economy fell, so did attendance at the company’s 13 racing properties. What followed were years of declining ad sales, ticket sales, and concession sales — and a challenge: How to manoeuvre out of the pits and back into the lead.

At the centre of that strategy has been Dan Houser, CPA, CGMA, the company’s CFO since 2008.

For the first time since 2007, the company is on pace to grow revenue for two straight years. The turnaround story ends with the financial statements. But it starts on the track.

Houser has kept International Speedway revved up by working to improve the company’s cash position, allowing it to invest in new opportunities amid a tight lending period. The company also has been tinkering with seating supply and ticket prices to spur demand. It has instituted advance-purchase programmes to increase the likelihood that tracks earn money in the event of inclement weather. And the company is working to maximise the value of its real estate by entering into joint ventures, including one with a gaming company that is running a casino overlooking its speedway in Kansas.

The most obvious changes are coming at its flagship property: Daytona.

A growing, then sputtering, sport

The National Association for Stock Car Auto Racing (NASCAR) is the main sanctioning body of stock car racing in the US. Its top circuit, the Sprint Cup, a series of races at tracks around the country, is a big television draw. Among sports in the US, it is second only to the National Football League in TV ratings. It is known for drivers such as Dale Earnhardt Jr., Jimmie Johnson, and Danica Patrick as much as it is for its abundance of advertising — with cars, racing suits, and post-race interviews sprinkled with logos and product mentions.

Formula 1 racing has a similar sponsor-driven model — but it is more global and high-tech, with 19 races on five continents and cars that don’t resemble the ones driven in NASCAR, with less surface area for large advertising. Formula 1 has likewise suffered attendance drops at certain stops on its circuit.

NASCAR, which has traditionally been popular in the south-eastern US, expanded to reach other parts of the country and had substantial growth between the mid-1990s and 2007.

Daytona International Speedway is the epicentre of the sport, home to NASCAR’s season-opening Daytona 500, the so-called Super Bowl of stock-car racing, where 43 cars zoom around a 2.5-mile tri-oval for 500 miles in search of a coveted victory, which equates to more exposure for sponsors. The race, which is broadcast in 150 countries, attracts the sport’s largest TV audience and earns the highest ticket prices and corporate partnership dollars.

International Speedway owns 12 tracks that have a combined 20 race dates in the Sprint Cup season, which runs 36 events from February to November. Daytona also has a Sprint Cup date over the Fourth of July holiday weekend.

When the US economy began to flag in 2007 and job losses started to mount, consumers began spending less freely than in the days when a red-hot housing market gave them confidence. Rising petrol prices also contributed, as people who previously travelled to numerous events cut back or eliminated trips to weekend races. Furthermore, the average NASCAR fan, with median income slightly lower than the US average, was more adversely affected by the economic downturn and remained less confident in the economy, according to Morningstar analyst Jaime M. Katz.

The downturn was evident in the patches of empty seats at many NASCAR venues, including International Speedway’s tracks from California to Florida to New York. Starting in 2007, International Speedway had six consecutive years of admissions revenue decreases, although TV revenue from a new contract helped offset those losses. 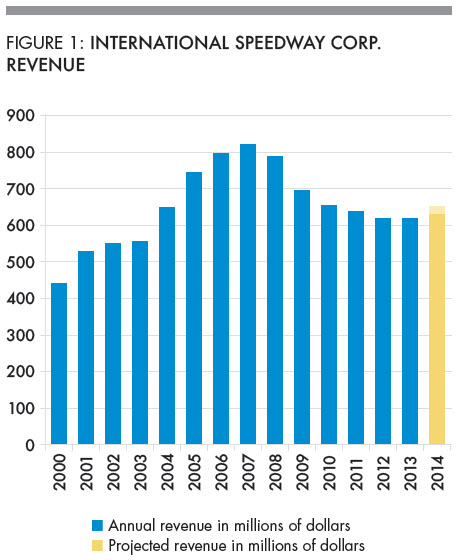 To reverse its revenue slide, International Speedway streamlined — reducing its workforce and centralising some functions that had been handled by individual tracks. In 2012, at the low point of the revenue retreat, International Speedway reported $507 million in expenses, down 12% from 2007. General and administrative expenses fell 13% to $103 million during that period.

The company hasn’t just been in cost-cutting mode. Instead, it has focused on getting race fans back into its seats. One strategy, a project called Daytona Rising, is ongoing construction scheduled to be complete in time for the 2016 Daytona 500. The plan is to reduce capacity, which was once about 143,000, to 101,000, taking out seats that had less-than-ideal sightlines and making each seat wider, going from 18 inches to 20 or 21 inches.

The project, which is expected to cost up to $400 million, will improve accessibility and the trackside fan experience with 40 new escalators and 14 lifts, what the company calls “vertical transportation.” Among other amenities are improved sightlines and social connectivity. It’s all part of the plan to have a brighter revenue picture in the future.

The casino in Kansas and One Daytona — a development that will feature shops, restaurants, a theatre, and hotel rooms across from International Speedway’s flagship venue — are two examples of the strategic development opportunities the company undertook even when core business revenue numbers were under pressure. The company is managing risk through the partnership structures. The One Daytona project, for instance, is a joint venture with an established real estate developer.

“What we’re trying to do is unlock the value of our real estate,” Houser said.

The strategy of improving the product is about pleasing the customer and focusing on the next sale. In all the cost-cutting, the company’s cardinal rule was that any changes needed to be invisible to the consumer.

“It wasn’t acceptable to reduce the number of gates open on race day, or have fewer trams to the parking lots, or close half the concession stands,” Houser said. “You wanted the people who are making their own tough capital allocation choices … to have a great experience. You can come here and have a great time, but if you have to sit for two hours in the parking lot, that’s what you’re going to remember.”

Seat reductions are taking place throughout NASCAR, including at the company’s Talladega Superspeedway, which once had a capacity of nearly 150,000. Most of the sections being removed are along the backstretch of the tracks, away from the more popular pit road, where cars return for fuelling and tyre changes, and where fans can get a glimpse of team strategy.

“Growing the fan base is essential to our business,” Houser said. “When the fans come, the corporate sponsors and TV follow that interest. That’s sort of at the centre of the bull’s-eye.”

Reducing the overall capacity can help create demand for tickets. And, as the overall economy improves, Houser said the company is seeing more early ticket purchases and a higher average ticket price.

“We’ve been reducing capacity to get back down into the supply-demand tension, which has been very important for us in the past,” Houser said. “We always built to demand back through about 2008, when the economy started to decline, and then we had excess capacity.

“Then fans start waiting later to buy tickets, and if you’ve got rain or anything otherwise in their lives that changes, they delay their purchase decisions. When you start to get supply-demand tension back in there, the first thing they do is make earlier purchases. Then, when you’ve kind of gotten back on top of that balance, you’ve got opportunities to influence pricing and also to drive demand to support events,” including Friday qualifying for Sunday’s race and minor league races on Saturdays.

Daytona Rising is all part of the strategy to improve the experience for the customer coming to the speedway to hear the roar of the engines.

Houser’s role in the project was, first, securing the financing, and second, briefing International Speedway stakeholders on the value of Daytona Rising. The company was able to refinance its debt, pushing out the maturation date on certain debt issues and converting to a lower, fixed interest rate. He also played a role in winning the support of senior leadership and the board.

Houser knew that the initial questions about the project wouldn’t be about the colour of those new, wider seats or the height of the escalators. The main question would be, “How are we going to pay for this?”

One reason Houser feels like a key member of International Speedway Corp.’s strategic team: He’s been charged to hire a top-notch supporting team — a pit crew, in racing parlance. Just as the NASCAR driver must rely on the crew to clean the windshield, fill the fuel tank, and change the tyres in fewer than 15 seconds, so, too, does Houser rely on his team to help drive success.

When you have a team that does that, you really get to play at a very high level of an organisation. The tone at the top of the finance and accounting organisation really will make a determination: Are you bookkeepers and scorekeepers, or are you able and invited to participate at a strategic level?

“We’re always at the table,” he said. His tips for building a great team:

Don’t be intimidated by people smarter than you. Houser said you can’t be afraid to let others shine. Doing so enables up-and-coming staff to demonstrate proficiency in day-to-day operations and give management more time to think about long-term strategy.

Focus on succession planning. Houser, in his 20th year with the company, has targeted potential replacements and assigns them tasks that will prepare them for the job one day. This includes regularly bringing staff into the boardroom for more interaction with senior leadership and asking for their input on what-if scenarios.

Hire keepers. Houser said he can tell early on in the hiring process if someone is a “keeper,” meaning that they’ll make a commitment to stay with the company for a long time. “I’m looking for people who are going to stick with something,” he said. “A lot of it is kind of intuitive. There’s got to be some chemistry.”

Identify issues, seek solutions. Early in his career, Houser said, a CFO praised him but also helped him realise something. “He said, ‘Dan, you’re really good at pointing out these issues. I can’t wait until you walk in the door with a solution.’ ” Houser now stresses that mantra to his team. He wants to hear not only about the iceberg ahead, but also a plan for avoiding it.