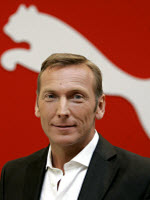 The idea for Puma’s environmental profit and loss account (E P&L) came to Jochen Zeitz, the company’s chairman and chief executive, while he was on holiday. Perhaps it was the idyllic surroundings, but his mind wandered to the latest methods used by environmental experts to value the ecosystem, and he got to thinking about how these might be applied to the business world.

“The next logical step would be for business to take that knowledge and translate it into monetary values that a company could relate to its managers,” Zeitz says.

“When you’re an environmental expert working for a nongovernmental organisation, subjects such as biodiversity are part of day-to-day language, but it is not so in business,” he continues. “The problem in business is that, if we don’t put a figure on something, then we don’t manage it.”

Valuing the impact
The first results of Puma’s E P&L, published in May 2011, were revealing for those inside and outside the company. Overall, the analysis placed a value of €7.3 million ($10.1 million as of this writing) on the ecological impact of Puma’s direct operations in 2010, which was almost entirely due to greenhouse gas (GHG) emissions. However, this amounted to just 7.7% of Puma’s total ecological impact, valued at €94.4 million ($130.6 million), once GHG emissions and water consumption across its entire supply chain were taken into consideration.

By far the largest contribution to this environmental impact was by its tier-four suppliers involved in raw material production, such as cotton farming and oil drilling. Their impact was valued at €41.4 million ($57.3 million), or 44% of the total supply chain, which was made up of GHG emissions valued at €16.7 million ($23.1 million) and water consumption valued at €24.7 million ($34.2 million).

Tier-three suppliers involved in the processing of raw materials by leather tanneries, the chemicals industry and oil refineries also contributed significantly to the overall impact (€25.1 million—$34.7 million—or 26%). There were also smaller contributions by tier-two suppliers, such as embroiderers and printers, and tier-one suppliers involved in the manufacture of Puma’s products.

“The whole idea behind the E P&L was to bring transparency to something that is hard to grasp when you are still stuck in the old paradigm, where natural resources and the environment have no limits, and therefore the externalities of doing business aren’t brought into the equation,” says Zeitz.

So what are the business benefits of Puma’s efforts? Zeitz is reluctant to quantify the value of the company’s sustainability initiatives in dollars and cents. “I ultimately believe it will benefit the business,” he says. “I think it is the only way to go and is the right thing to do. Those are three reasons to do it, and there are no reasons not to do it.”

Puma and its parent company, PPR Group, worked with PricewaterhouseCoopers and environmental data company Trucost to develop a methodology to quantify the tonnes of GHG emissions and cubic metres of water consumed in its business and supply chain, then applied values to account for the associated economic impacts, according to company press releases.

Intelligence objectives
So how have the findings of the E P&L been translated into business goals? “The first stage is to make the information that we have uncovered in the P&L available, and the next is to try to develop practical decisions about how we reduce and mitigate the size of our footprint. In addition, we have to take into account the problems that climate change and water scarcity will create for the business in the future − we would rather be ahead of the curve when it comes to managing those risks,” he says.

The clear lesson of the exercise was that, if Puma wants to reduce its environmental impact, then its main focus should be on the production and processing of raw materials for use in its products, rather than in the manufacturing stage or the operational footprint of the business.

Finally, the company is actively involved in cross-industry co-operation to find ways in which excess materials can be re-used by other industries − for example, the use of polymers by the chemicals industry. These types of collaborations will be needed in order to find new solutions to issues, such as rubber recycling, and to create global standards of practice. Puma already works closely with the chemicals industry and is committed to eliminate the discharges of all hazardous chemicals from the whole life cycle of its production by 2020.

Leading by example
Reporting has been at the heart of Puma’s sustainability strategy for the past 13 years through projects such as the Global Reporting Initiative (GRI), an organisation that produces a comprehensive sustainability reporting framework that is used worldwide.

But putting a monetary value on its environmental impacts has added several elements to Puma’s approach to sustainability. First, by mirroring the language of business, the E P&L has helped managers understand the environmental problems that the company faces, which has given new impetus to develop practical solutions. Secondly, it has created a marker that has grabbed the attention of government bodies and industry-leading companies, which Zeitz hopes will help to develop global standards and better practices. It also helps Puma to prepare for a time when legislation may require disclosure on these issues.

This year, the company plans to push another reporting frontier when it publishes the first-ever social P&L to accompany its E P&L. This project will measure social factors, such as wages paid, working conditions, diversity and gender equality, health and wellbeing, and community cohesion.

Stage three of the initiative will complete “the other side of the equation”, according to Puma news releases, measuring economic factors and offsetting those against the social and environmental costs calculated in the first two stages. Measures on the economic P&L would likely include job creation, total tax contributions, indirect tax payments, indirect and induced employment, and business creation and growth.

By 2015, PPR plans to publish a combined E P&L covering every business in its stable, which includes luxury goods brands such as Gucci and Yves Saint Laurent.

By taking a lead, Puma is also setting an example for its suppliers around the world. The lion’s share of Puma’s suppliers and its largest ecological impact are in the Asia-Pacific region; this is the source of €70.7 million ($97.8 million), or three-quarters of its total impact. As a result, improving reporting on sustainability within its Asian supply chain is a key part of its overall sustainability strategy.

Over the past year, 20 of Puma’s key suppliers in South-East Asia and other major sourcing regions have received GRI-certified training on transparent measurement and reporting on their sustainability performance, and from 2011 began issuing their own sustainability reports.

Water valuations:
The water valuations are derived from an extensive review of the available water valuation literature adjusted for local incomes and water scarcity. The values for water represent the reduction in the indirect use value of water accruing to third parties such as freshwater replenishment, ecosystem maintenance and water nutrient cycling as a result of water consumption in Puma’s entire supply chain – including raw material inputs – and its own operations. The lost value associated with reduced water availability for direct consumption (the opportunity cost of water) is not included because this is assumed to be accounted for in the price Puma and its suppliers pay for water extraction and use.

The indirect use value of water is considered to be principally driven by its scarcity. To estimate the relationship between scarcity and value, a sample of 18 existing studies was used. The available literature of sufficient comparability is limited, and the decision was taken to use a subset of comparable US studies to plot the relationship. The value is location-specific and is proportional between the relationship of value and scarcity.

The observed relationship between water scarcity (withdrawal from surface and groundwater as a percentage of actual renewable freshwater resources) and value was calibrated to the valuation estimate obtained from the literature review and applied across sites and countries in Puma’s own operations and supply chain to estimate the water use externality. The level of water scarcity in Puma’s operations and supply chain was obtained at a basin level where location-specific information was available and otherwise considered at a country level. The weighted average value according to the locations of Puma’s operations and that of its global supply chain is $1.08 (€0.81)/m3.

Greenhouse gas emissions valuations:
The carbon value coefficient used in this E P&L is derived from a subset of the social cost of carbon (SCC) estimates reported by the economist Richard Tol in his 2009 paper The Economic Effects of Climate Change. These estimates attempt to value the damage (as a result of current and future climate change) attributable to each tonne of carbon dioxide released in a given year.

The 232 estimates of the SCC included in Tol’s paper are based on a wide range of models and assumptions and range in USD from below-zero to four-figure estimates. There are a number of factors that can have a significant impact on resulting SCC estimates. These factors, along with Puma’s approach, are summarised below: